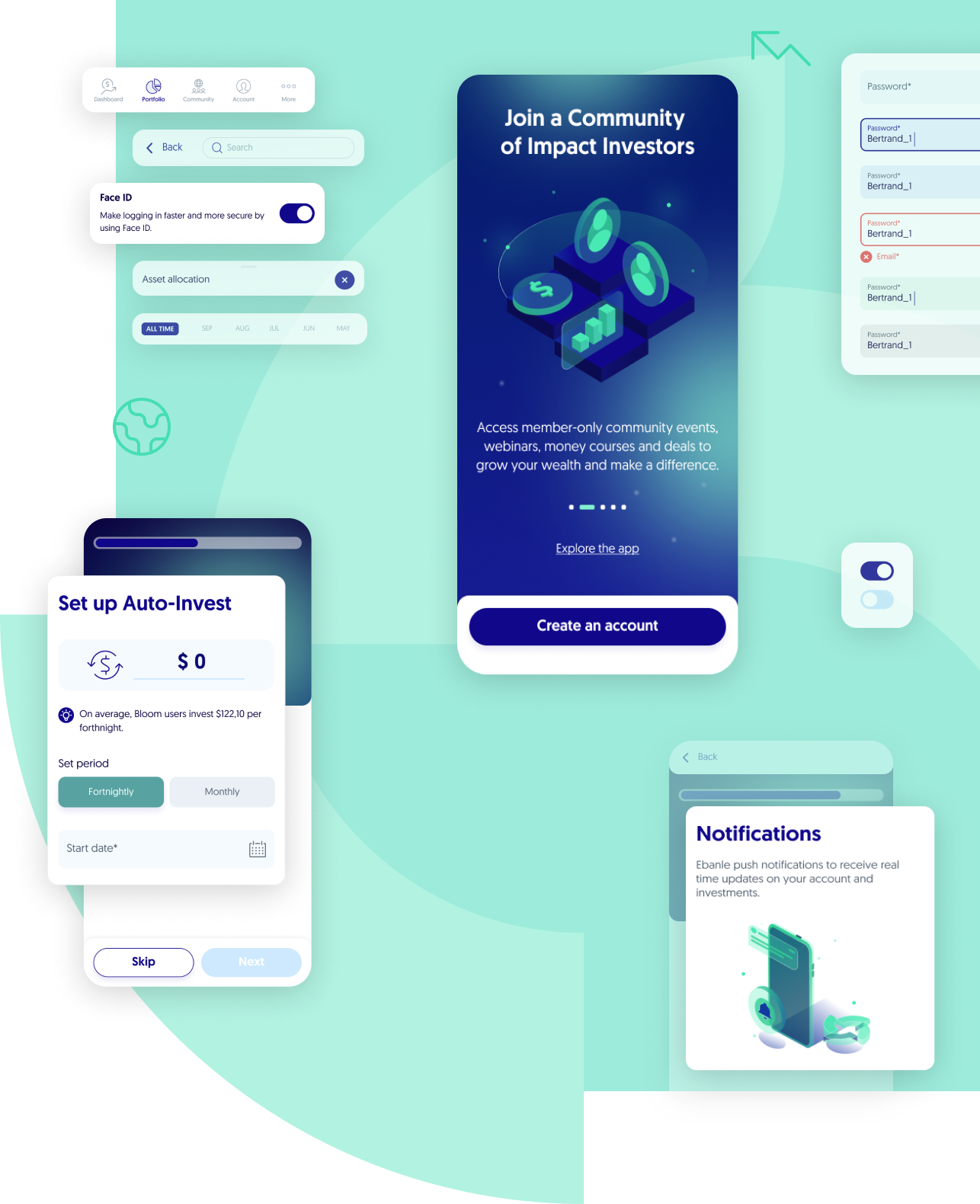 From UX Audit to a comprehensive, end-to-end design project

The company reached out to us with the idea of a small-scale project, including a UX Audit to find quick fixes within their mobile application. As we started working together with their inspiring team, more and more design tasks arose, resulting in a comprehensive, five-month-long collaboration, including rebranding, application and website redesign, custom illustrations, a design system and a product video too. 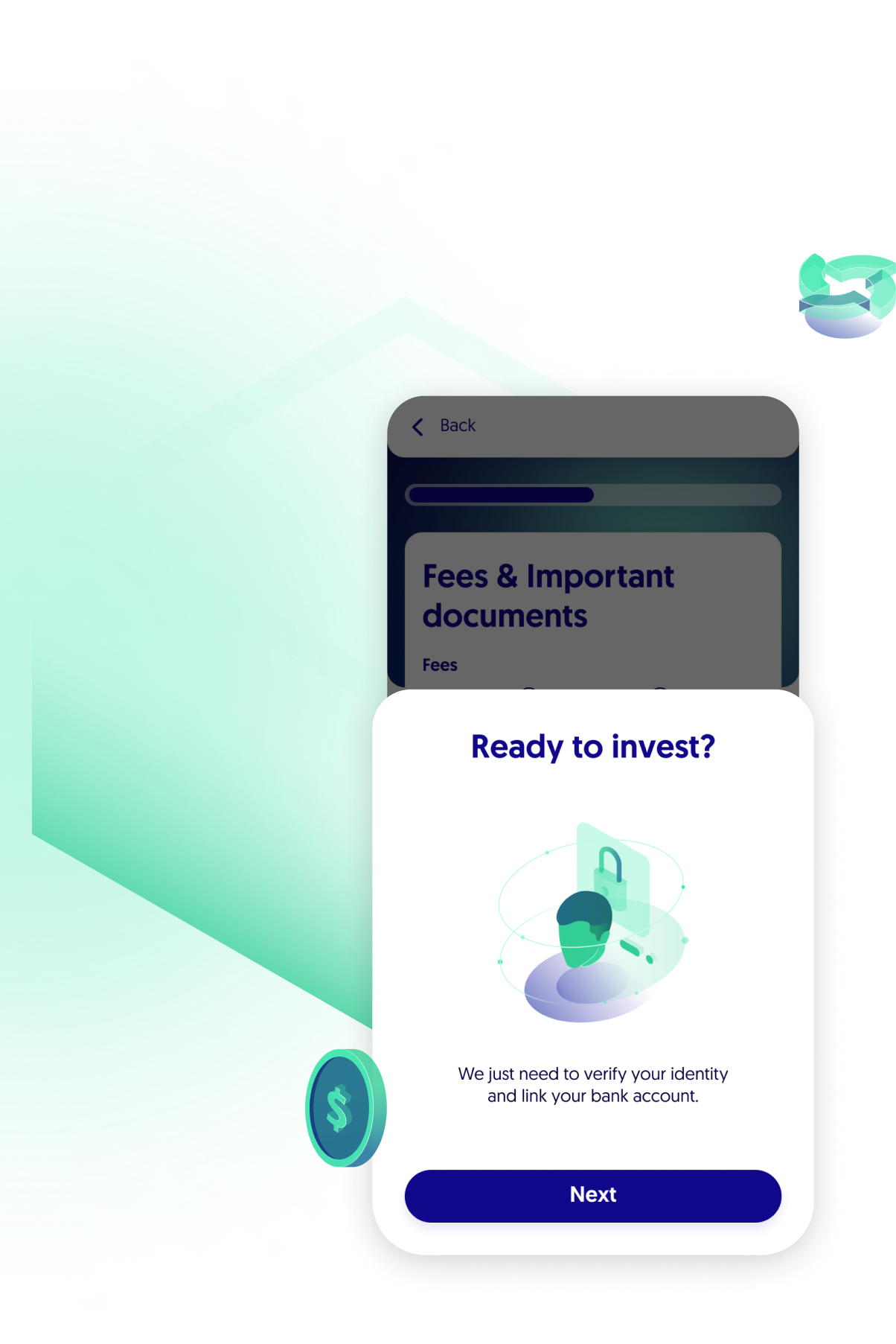 At the initial phase of our joint work with Bloom, the Australian tech firm needed a UX Audit in order to identify quick wins within their mobile app. After sharing some user stories and flows with us they also highlighted the areas which they thought needed special attention.
We thoroughly analysed all the screens of the app and picked up the inconsistencies, bugs and all the flows, actions and features that were difficult to understand. We created a complex review of what we’ve found and also made some important suggestions. We separated the UX- and the UI-related modification suggestions by tagging them accordingly and we also prioritised the identified issues based on their severance (minor and major problems).

‍Besides the generic evaluation, we also provided the company with a detailed assessment broken down to each and every screen. Regarding the output, the UX Audit resulted in an expert review in the form of a presentation which later formed the basis of the application redesign. 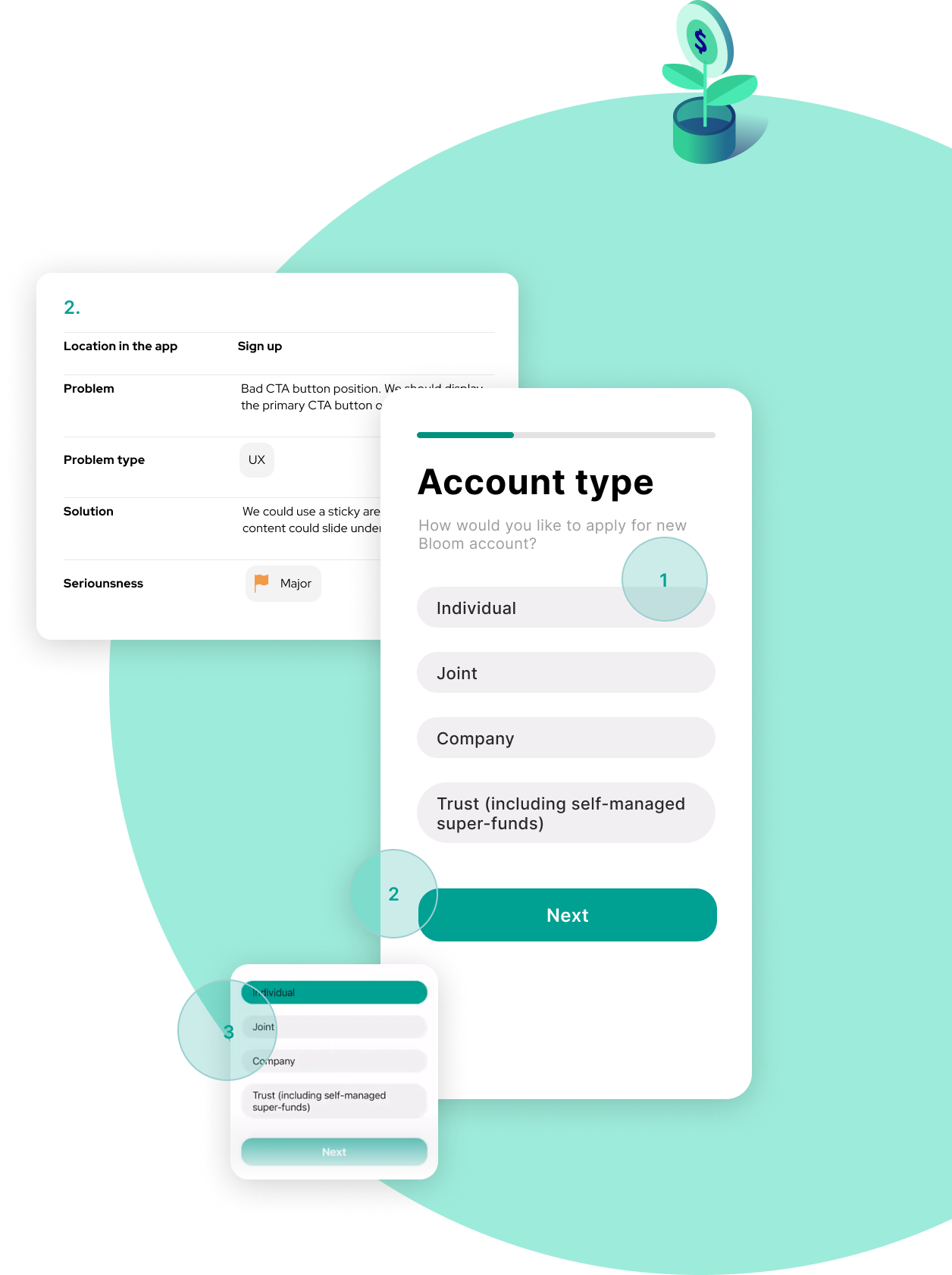 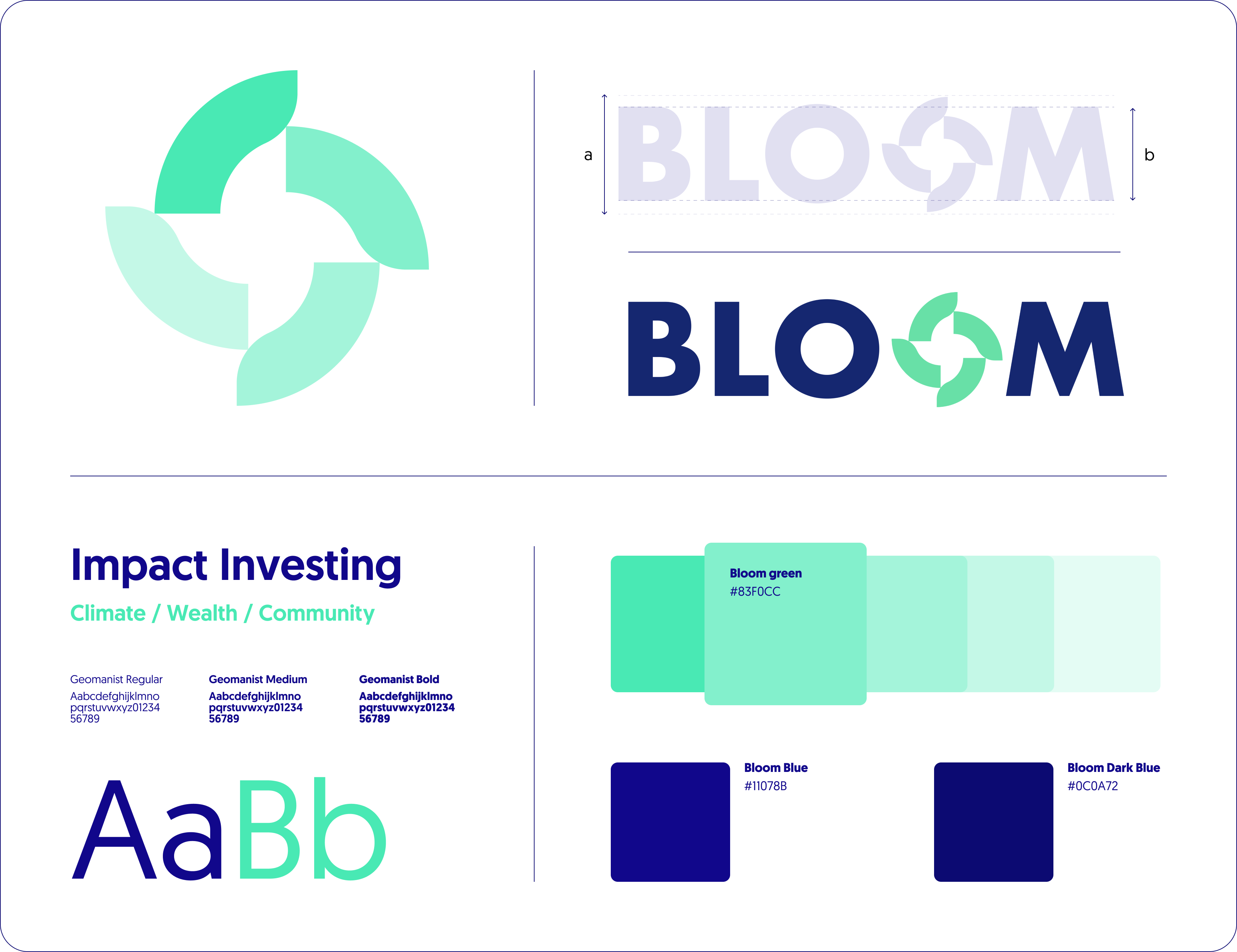 A new logo, a consolidated colour palette and some hot marketing materials

Bloom originally provided us with branding guidelines to apply when facelifting their application. Throughout the UX Audit, our professionals found out that these were unfortunately in line with another tech company’s brand resulting in a logo redesign too.

‍Bloom’s new logo kept its resemblance to a blooming flower but with fewer “petals” - this way it also reminds people of wind turbines indicating the positive climate impact the company works for. Throughout the rebranding process, we decided to change their initially too vibrant colour palette and rather used pastel colours to emphasise closeness to nature. In addition, our team helped to improve the company’s email marketing as well by creating a distinct set of materials.

Based on the newly created brand guidelines we also designed App Store artworks for Bloom. This was a necessary step as App Store rejects all the creatives on which the device is not identical to the one the customer uses.

Based on the UX Audit, we created a UI concept which was used throughout the complete redesign process.

The previously described UX Audit formed the basis of the redesign process and we put our recommendations into practice when creating the new design. Creating the UI concept was the first step, during which the marginal screens were selected and recreated.

‍Based on these screens and the feedback we received on them, we came up with 5 separate concepts of which the final version was selected and iterated on. This resulted in the synthesised UI direction.

We started off with the registration flow, which is quite a long and important one (uploading official documents, data, etc.), and as it is a crucial journey within the application, it required approximately 40 screens.

‍We also redesigned the onboarding process, which was followed by internal pages of the app, such as the profile pages, the social sections, the dashboard, the articles, the investment manager, the internal menus, events and projects. 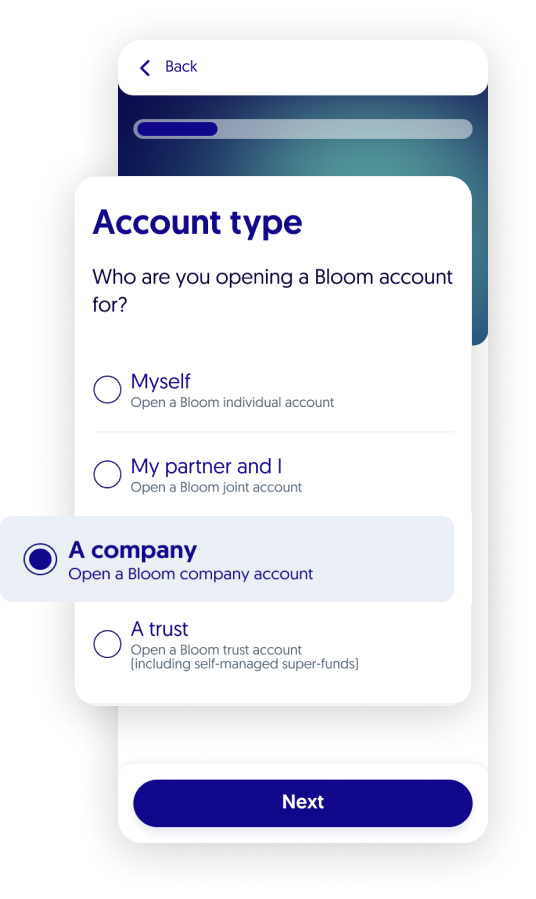 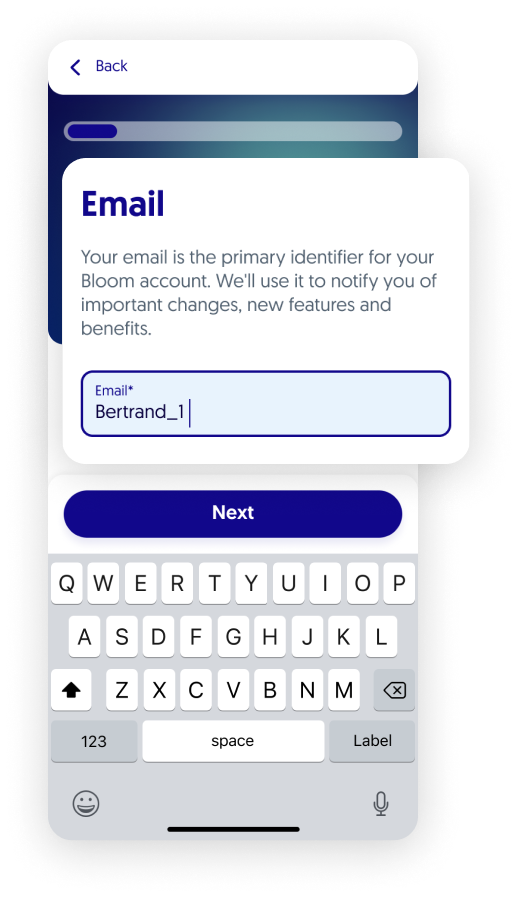 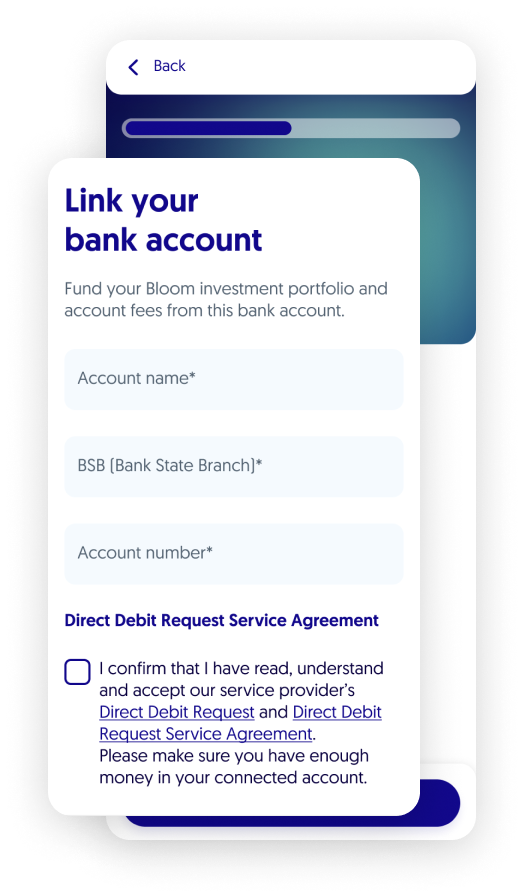 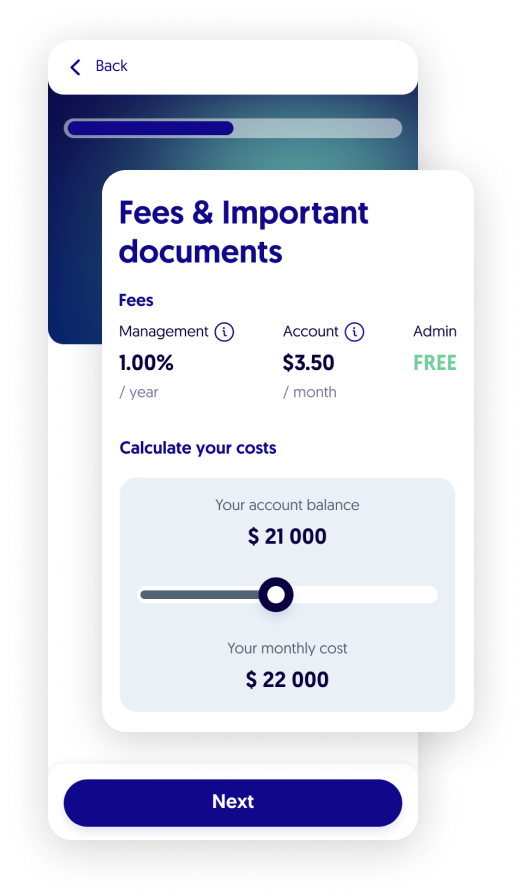 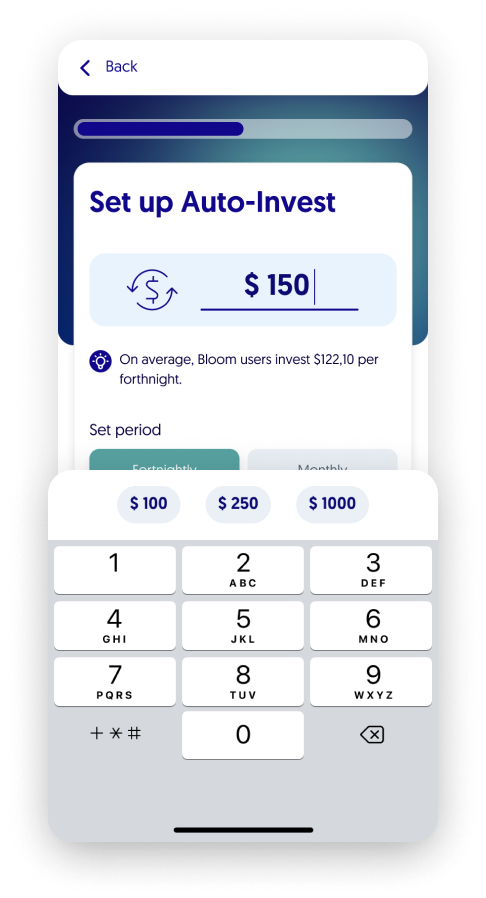 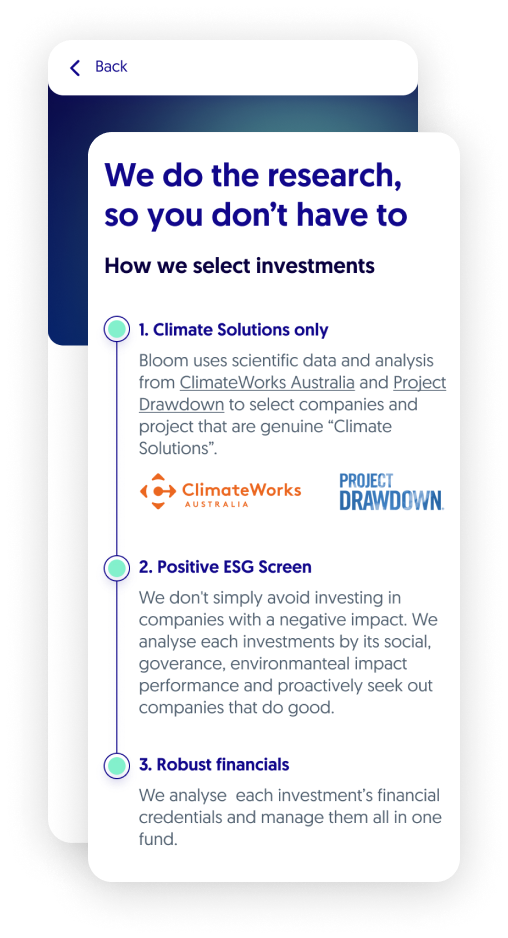 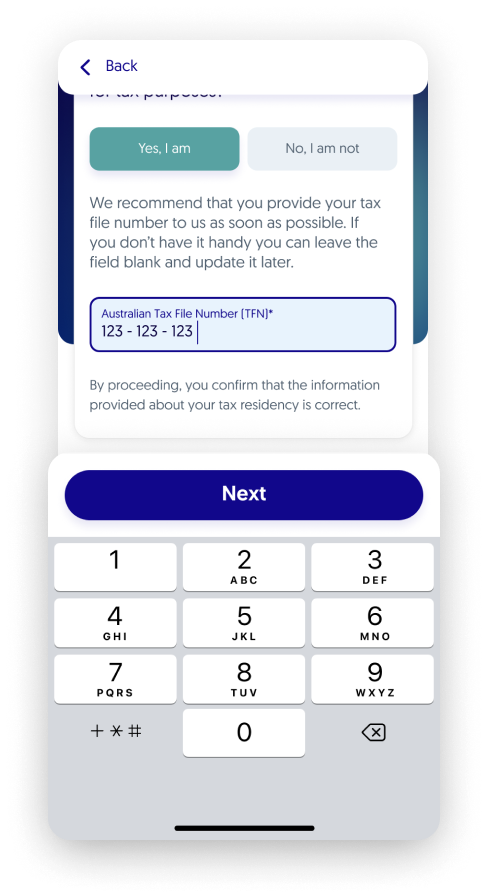 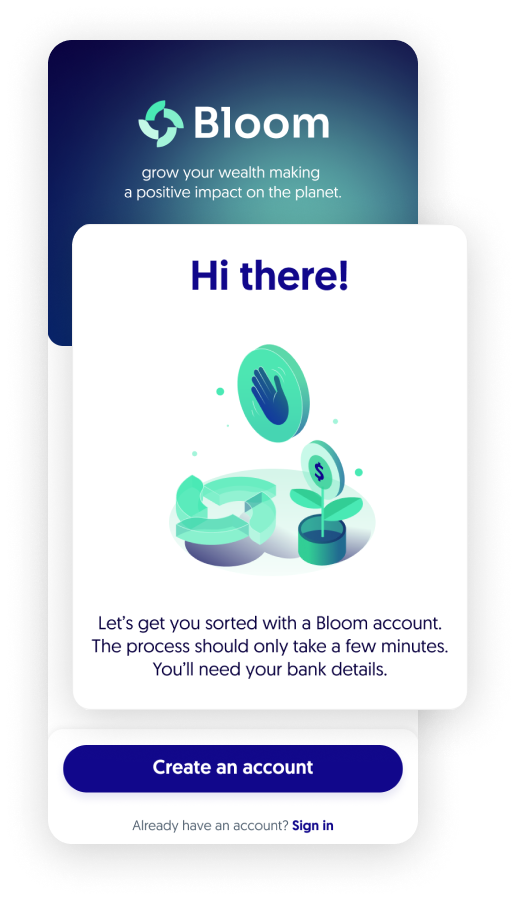 ‍Regarding the mentioned isometric illustrations, it's important to note that the application contains some screens with dark backgrounds while some parts are generally light. As both light and dark screens need to be compatible with contrasts, it was quite a challenge to find the right balance and deliver complex concepts, all at once.

‍The illustrations needed to be detailed enough, however, it was also key to be able to see and understand them on small screen sizes too.

We also created a complex design system for the application, which included several elements such as a colour palette, buttons, dropdowns, components and variants as well. To complete this task we used Figma's new variant feature.

During this phase we were working with tight deadlines and the details of the design were discussed and fixed in cooperation with the development team. 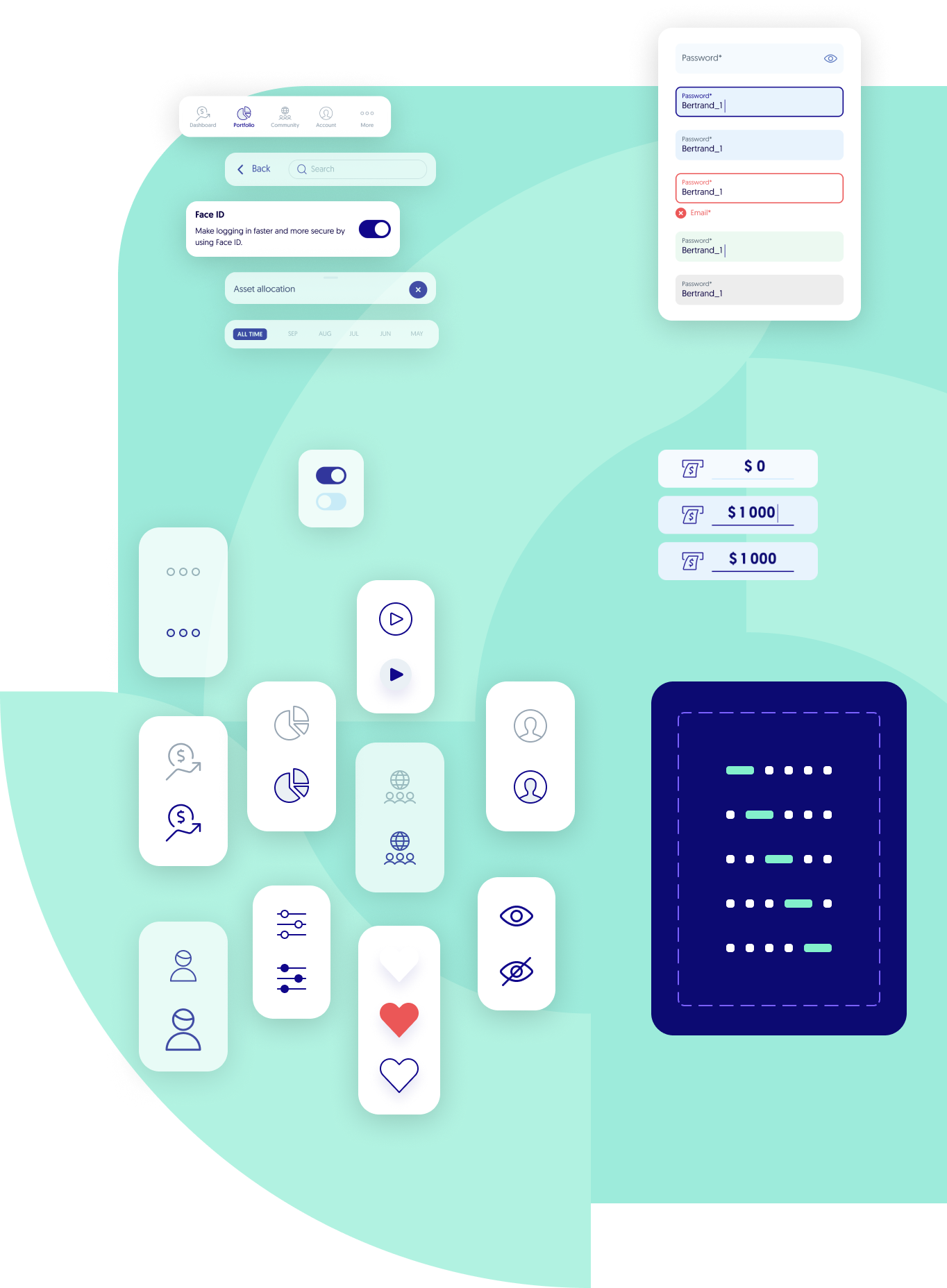 As the first step of the website redesign, we received a file on how Bloom wanted their website to look like and how they wanted to revamp the brand image.

‍Bloom wanted full colour surfaces covered with large, colourful images, so our original concepts were aligned with this need. We executed several iterations since we felt that this wasn’t in line with the image of a modern tech company and recommended to hit a more low profile tone, similar to the app release.

Based on the agreed direction, we redesigned the landing page which was followed by the subpages, namely the Impact Investing and the Climate Impact Fund tabs. Everything was created in WIX and all of the designs were saved and stored on this platform so the team of Bloom could easily access and use it later on. 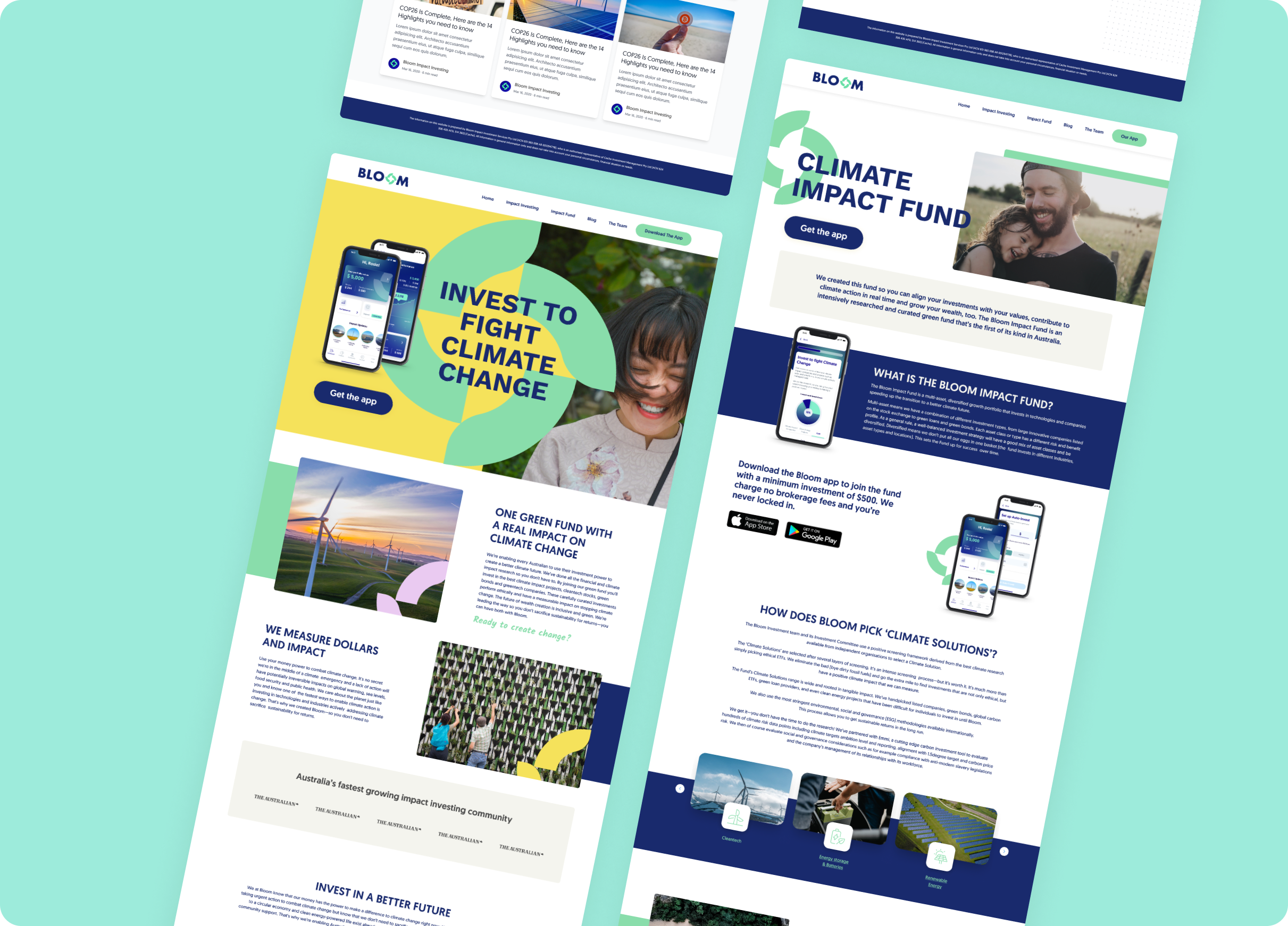 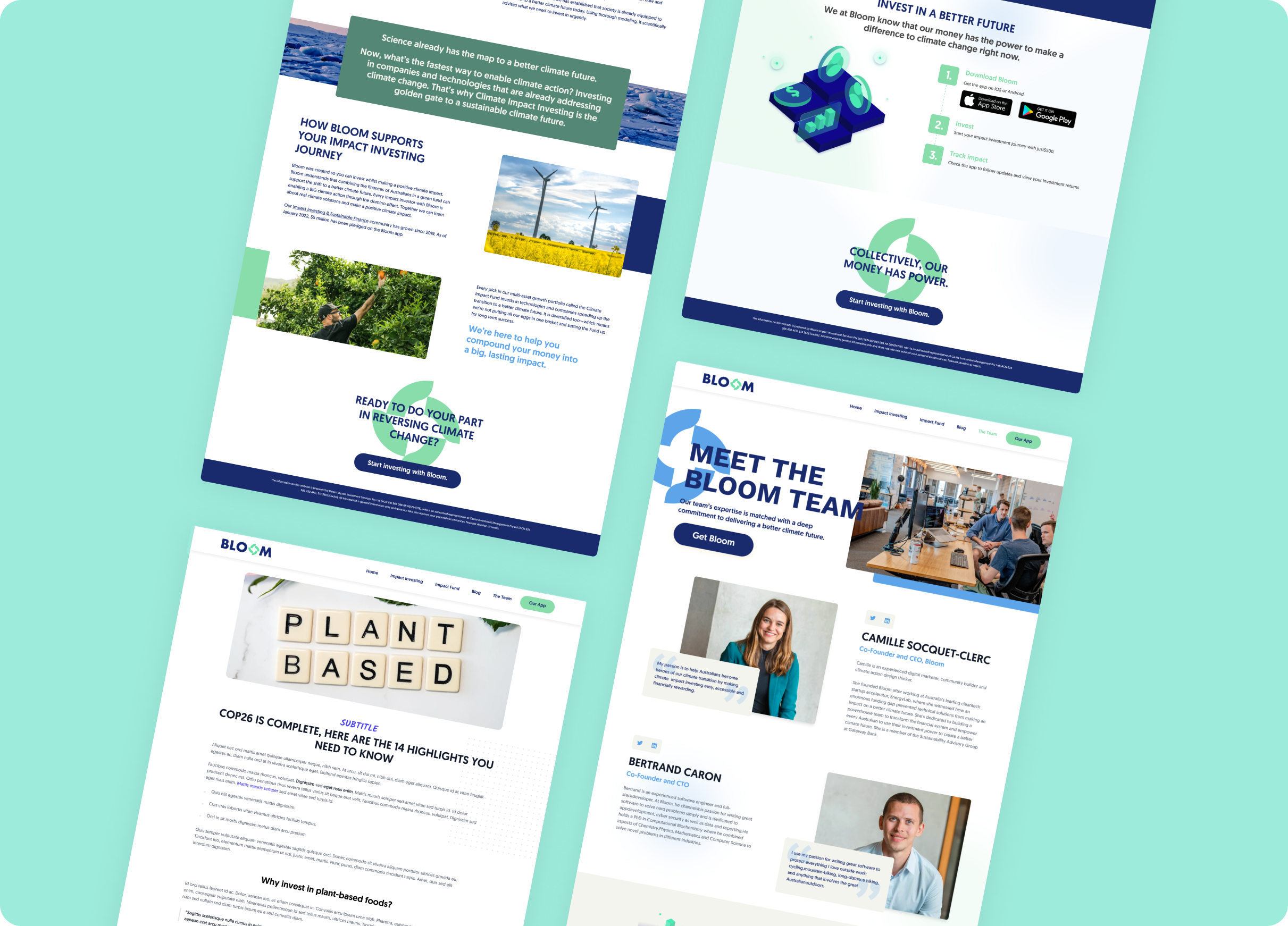 Bloom came back to us with the need for a product video for the newly released app and they also provided us with a script on what should the video include. They sent the voiceover they wanted to use and we drew our storyboard based on that. The starting point of the animated video was this initial storyboard for which we created a visual framework.

Diversity was an important aspect so we wanted to use characters of different ethnicities and in colourful clothes. The animations, which can be seen in the first part of the video, were drawn specifically for the video by ff.next’s experts, however, we also decided to include the app illustrations along with the mobile screens and icons. Our motion designer colleague contributed greatly to the creation of this outstanding animated content piece. 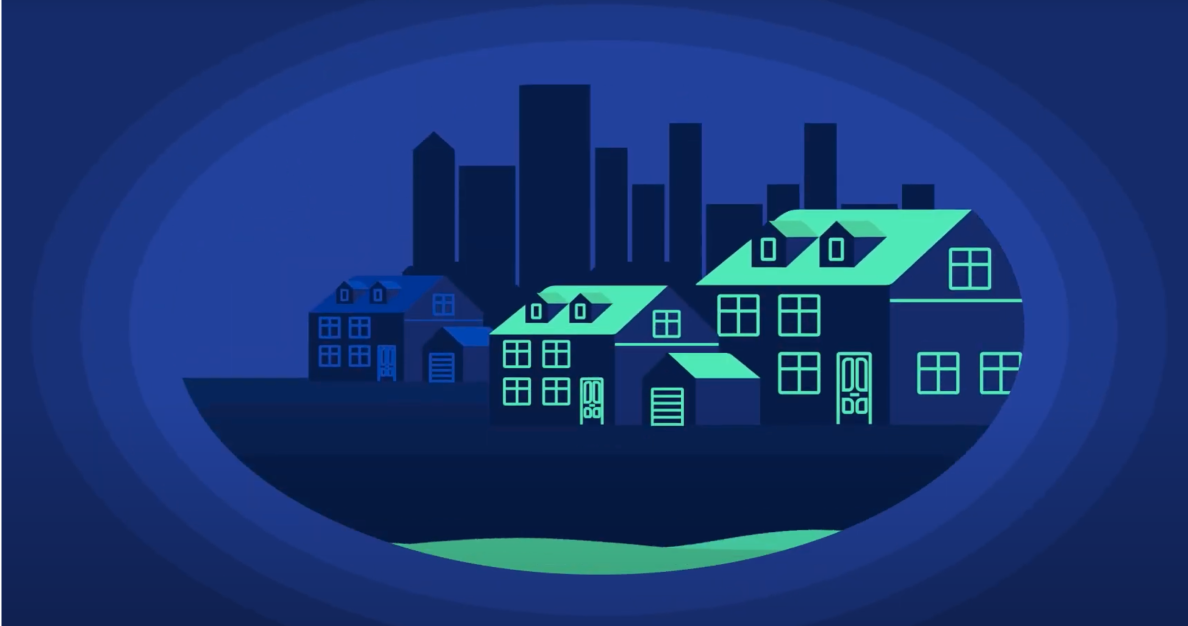 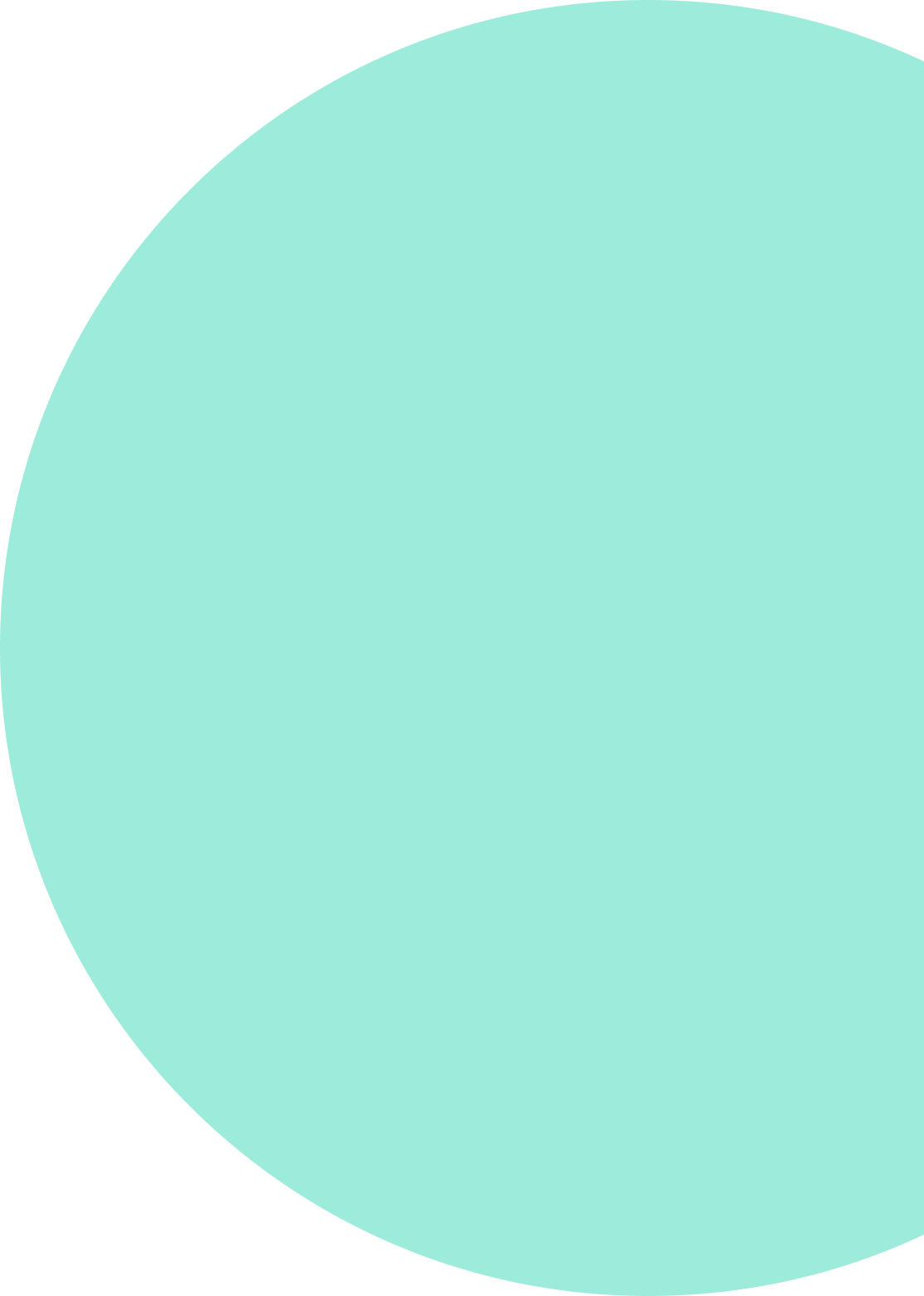 It was an amazing experience to be part of a global collaboration, joining forces with an Australian climate impact investing company to design a socially responsible solution.

By providing Bloom with UX Audit, rebranding, application and website redesign, a design system and a product video, we involved 7 designer colleagues in this project with different areas of expertise.

Our diverse team enables us to serve our partners with comprehensive, end-to-end design services, handling all types of design problems from graphic design and illustrations, through the creation of pixel-perfect, seamlessly usable digital interfaces to product videos and other marketing materials.

The solution’s track record speaks for itself: between March, 2022 and September, 2022 the app has been downloaded by almost 2,000 users, who altogether have invested over 1.3M AUD, with a +1.21% return and Bloom has also been awarded the "App of the Month" title in Money Magazine Australia! 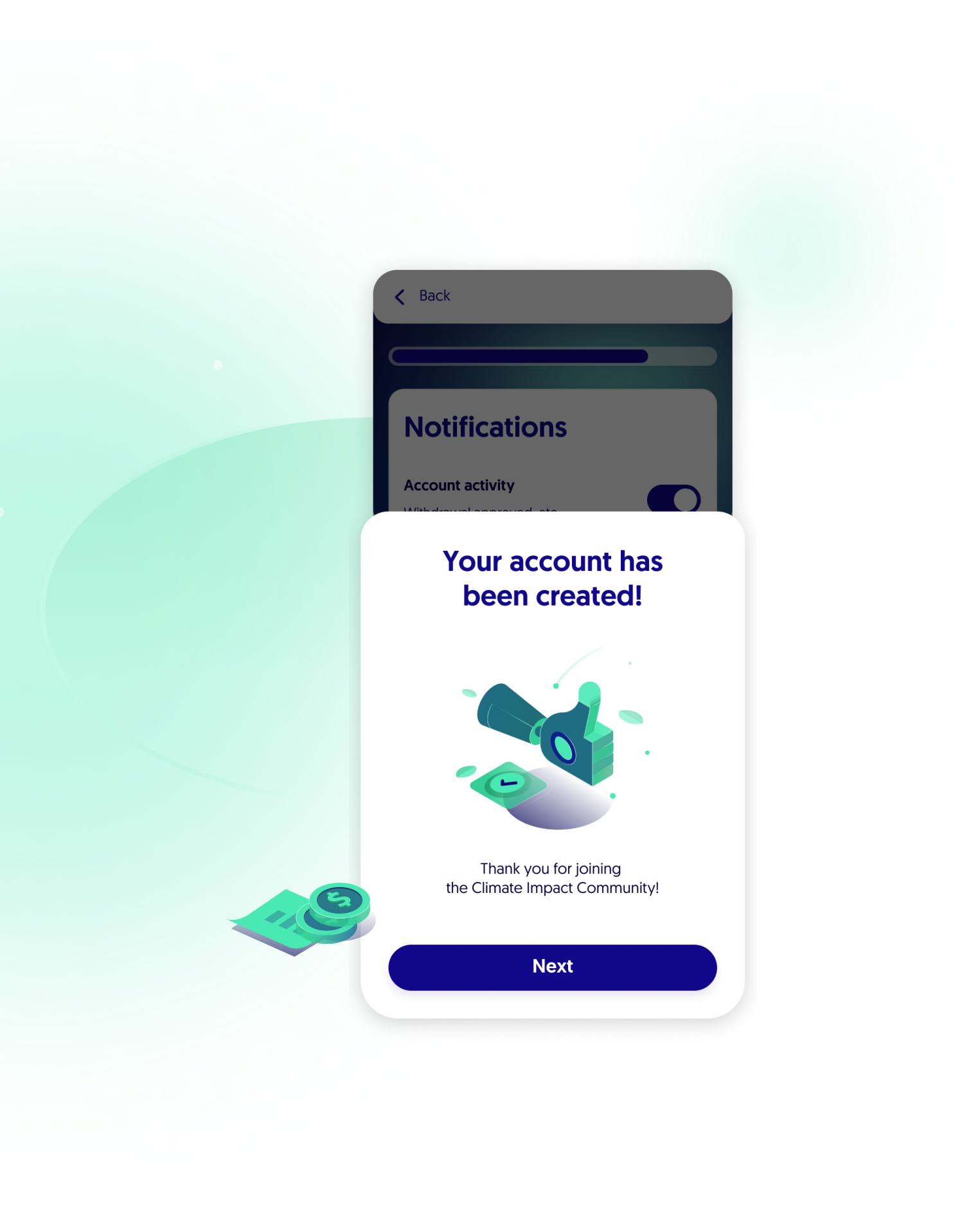 “Brilliant agency! Very easy to deal with and they nail the brief every time. It's rare to find a creative agency that can so effortlessly bring your brand to life. I would definitely recommend ff.next.” 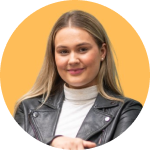 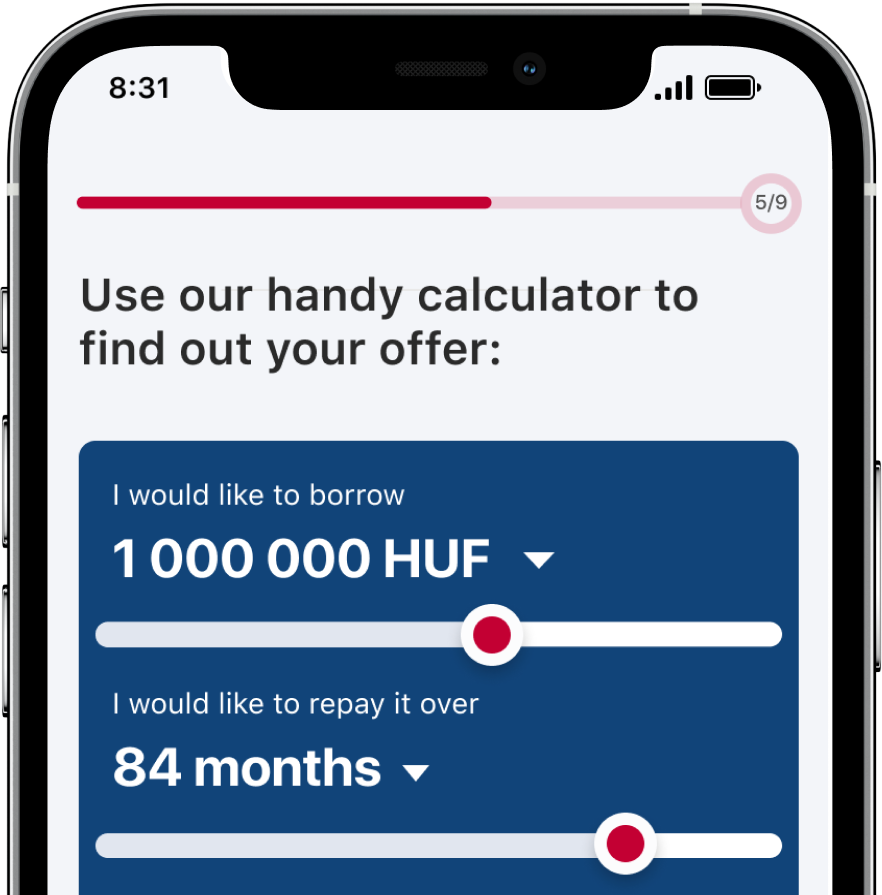 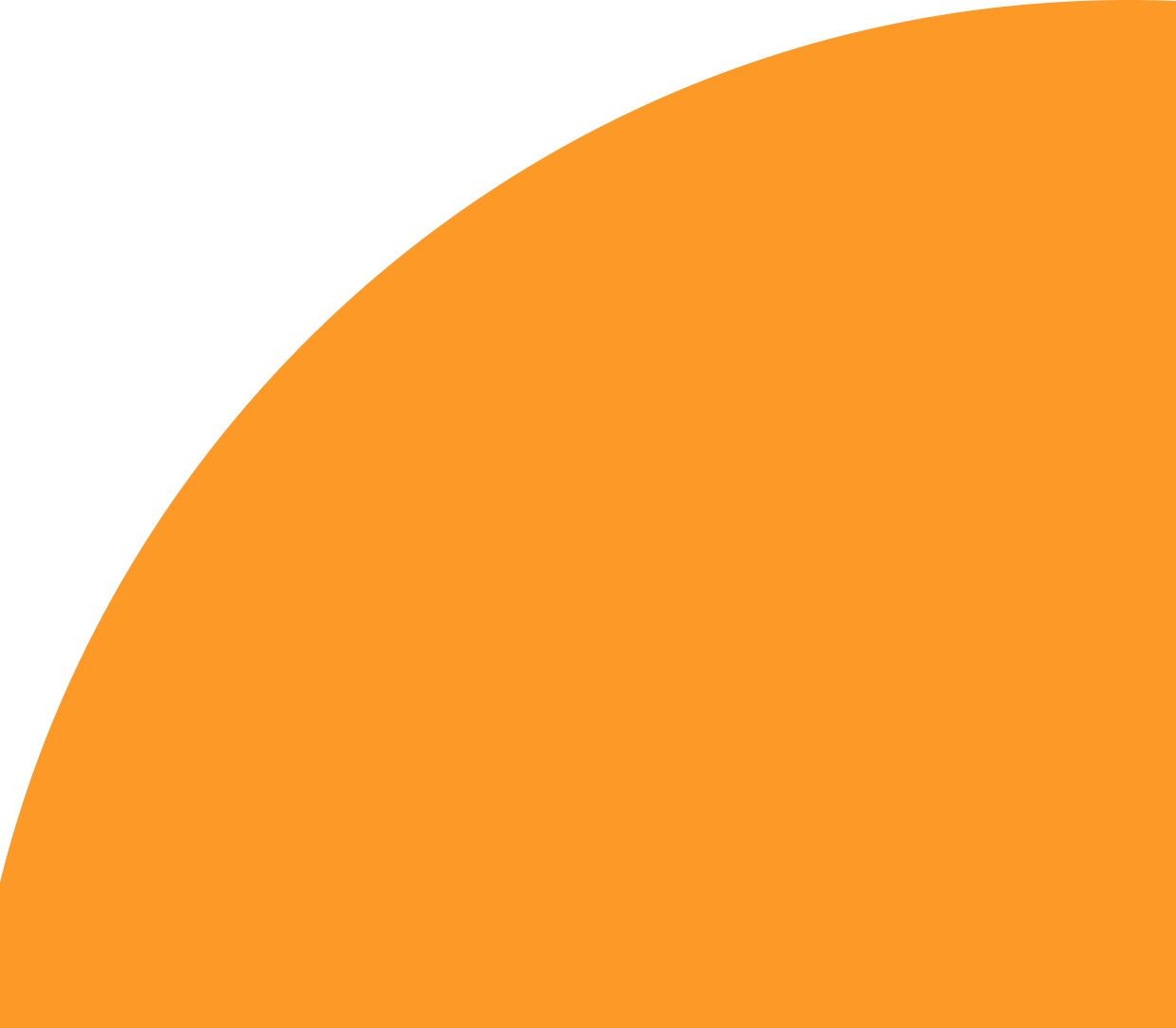 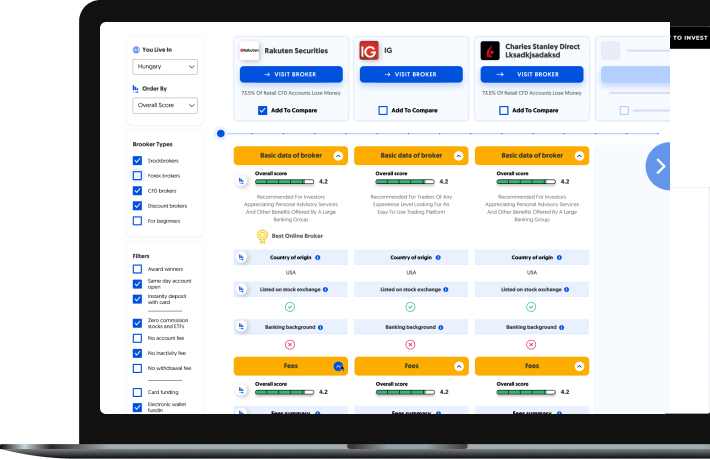 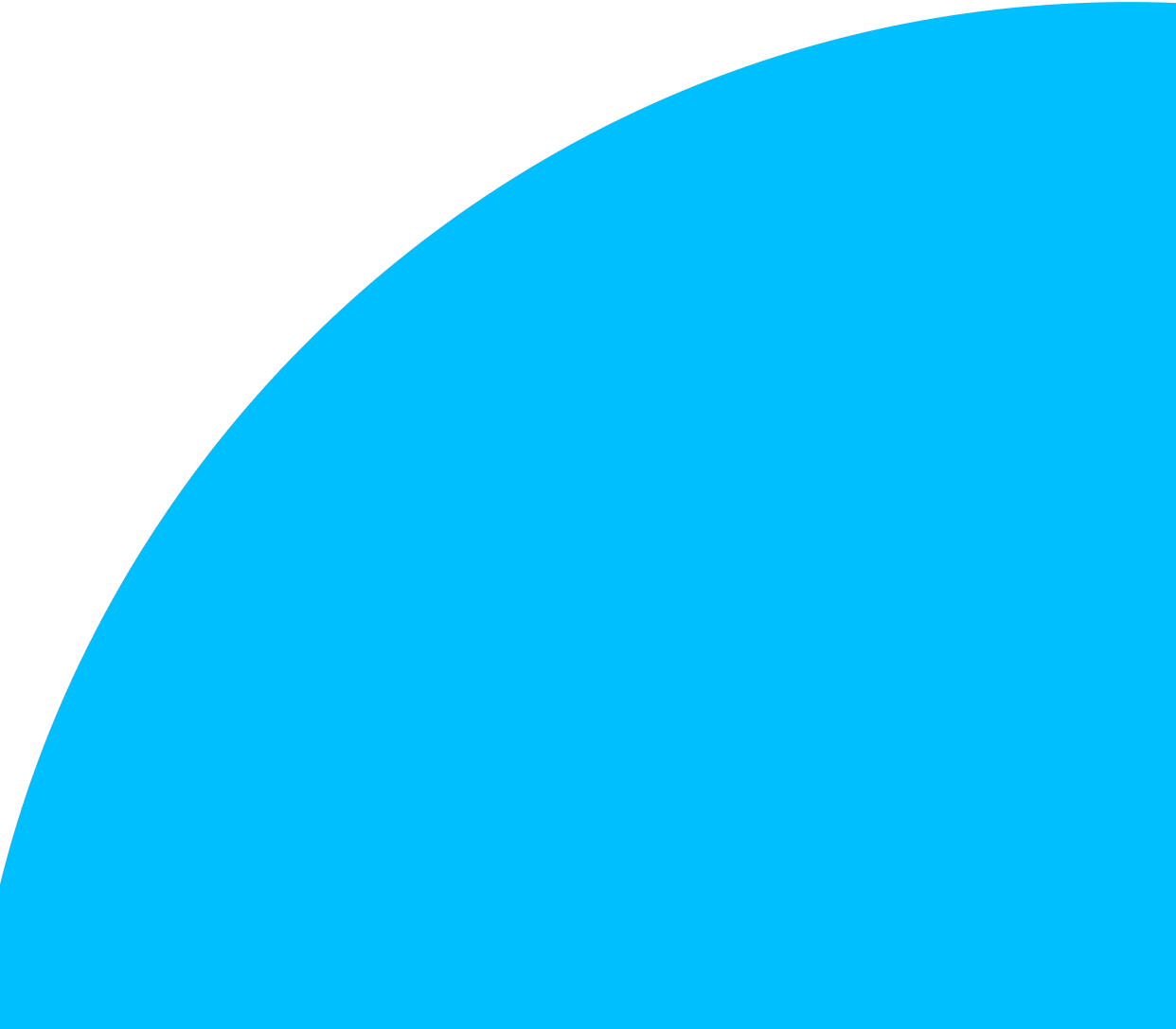 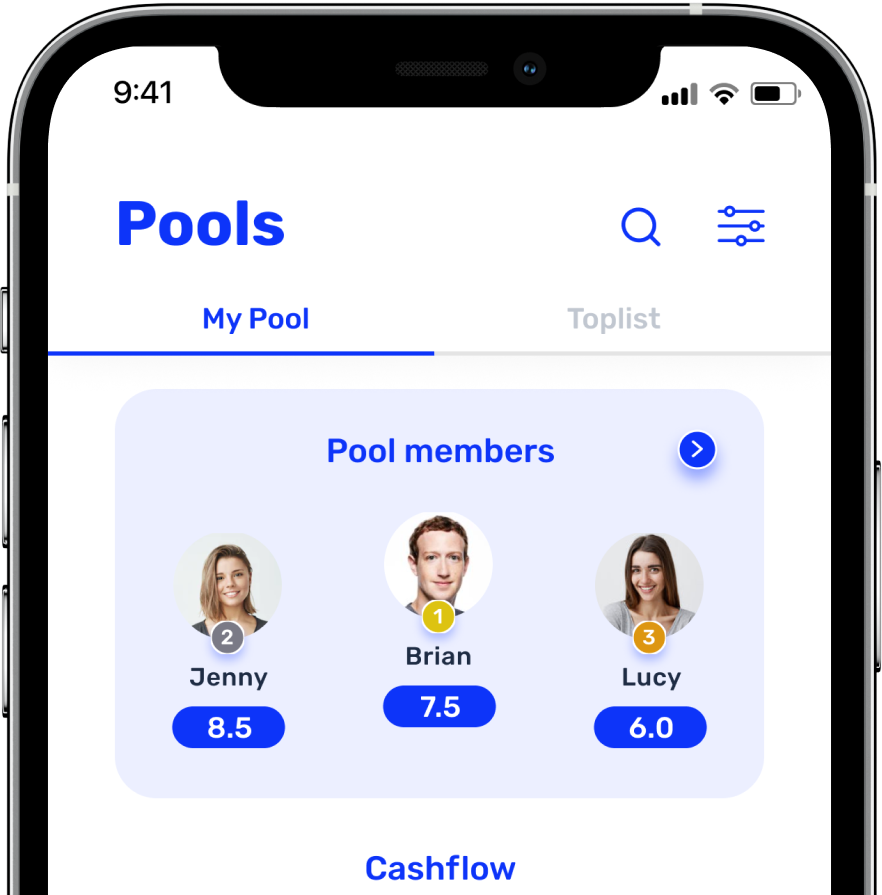 Have a project for us?

This site uses cookies,
are you okay with that?
OK, cool

Having an award-winning idea in mind already? Looking for help to figure out the initial concept? Either way, let us know!

Thank you for your interest, it's much appreciated! We will get back to you as soon as possible! 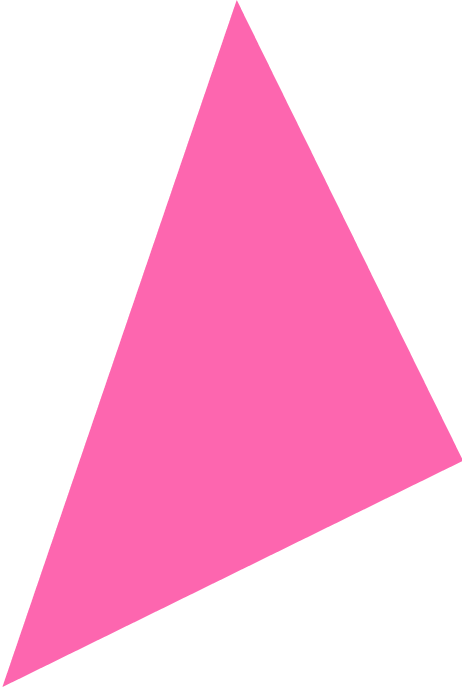 Oops! Something went wrong while submitting the form.
Not a form-person? Simply write an email.
hello@ffnext.io
Copied:)